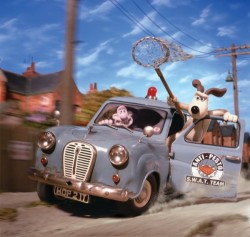 But it is true, there seems to be a 'large' or as some have described 'monstrous' rabbit on the loose in Felton, Northumberland (UK). Its been ripping up dozens of prize winning leeks and turnips, taking huge bites out of cabbages and carrots, and generally causing such a fuss, that a local sharp shooter, possibly a relative of Victor Quartermaine, has been called in. But animal welfare workers and the RSPCA have urged the growers to set a humane trap for the beast, so they can release it elsewhere. That's it, just pass the buck onto somebody else!!!

A brute of a thing
Reminiscent of the resent Wallace and Gromit film, locals have cursed this over-sized bunny as their very own 'were-rabbit'. "This is no ordinary rabbit,” said one local, another clams to have seen its footprints, and "they are huge, bigger than a deer." Crazy!

Call Anti-Pesto I say! Or perhaps a bit of Stinking Bishop will draw it from its burrow?