A lot of people ask: What is the Mongolian Death Worm?
Here’s a short summary of information found around the internet, books and from our own expedition in 2005.

The Mongolian death worm (Mongolian: олгой-хорхой, olgoi-khorkhoi, “large intestine worm”), first reported in 1929 is also known as olgoi-khorkhoi meaning intestine worm because of its colour and shape. It is a fat, bright red huge worm measuring two to four feet in length and is likened to a cow’s intestine.

It lives under the sand of the Gobi desert and is said to emerge during the hot months of June and July and to hibernate the rest of the year. The death worm is so feared by the inhabitants of Mongolia that they believe the mere mention of his name will bring bad luck.

It kills its victims instantly by shooting a poisonous acidic liquid on them. The liquid, which the worm is able to shoot several feet, turns everything it touches yellow and corroded. It is also attracted to anything yellow.

It is said to move about under the sand, and when it wants to kill someone, it moves half its length out of the sand. It starts to inflate its body. The bubble on its body keeps getting larger, and, in the end, the poison squirts out from it. The death worm is also said to kill by emitting an electric shock that it can also send several feet.

The worm became more widely known in 1990 by the Czech author Ivan Mackerle. He learned about it from a female student from Mongolia. The communist government in Mongolia banned any talk of the death worm and tried to convince the people that it never existed. They also banned any expeditions in the area, calling the death worm, a fairy tale. After the fall of Communism in Mongolia in 1990, it was evident that they did not succeed in changing the minds of the people.

Mackerle launched an expedition into the Gobi desert in 1990 in search of the worm but was unable to bring back any evidence except for more testimonials. Mackerle has reasoned that the creature might be a species of skink. A skink is a strange variety of lizard whose head is hard to distinguish from its tail. Skinks also live buried under desert sands. But they have four stubby legs and scales, unlike the reportedly smooth-bodied Mongolian death worm. Mackerle has also suggested that it could be a type of lizard called the worm lizard, although that species is not poisonous.

Among lizards, only the Mexican beaded lizard and the gila monster possess poisonous venom, but they do not squirt it, and their venom definitely is not instantly lethal on contact. It has also been suggested that the creature is some form of snake. The element of death from a distance and the intense heat of the Gobi Desert eliminates the possibility of most creatures.

Could it be an unknown life form? Will one ever be captured? In the meantime, the legend continues.

In 2005 Cryptoworld travelled to Mongolia with the CFZ to search for the death worm. Although no evidence was found, we did interview a lot of witnesses and explore parts of Little Gobi and southern areas of Mongolia around Dalanzadgad.

Almost every witness (farmers, police officer and ex-army commanders) described the same thing: a giant red worm like creature, about 2 to 3 feet long — just siting on the ground as if soaking up the sun. Some described it as moving or coiled up like a snake.

We travelled to Mongolia in May 2005 for 4 weeks (known as the month of winds). Temperatures ranged from -10°C in the capital Ulaanbaatar to 35°C in the Little Gobi (close to the Chinese boarder).

It’s our opinion that something does exists out there, probably a (skink) lizard. Due to the remoteness and unique habitat is has managed to remain unknown — although the idea of corrosive venom and electric shocks are exciting, it’s very unlikely and probably just apocryphal.

Red about our expedition to Mongolia in 2005

Selection of images from the 2005 exhibition.

SIGHTINGS – No Westerners have ever seen it, but locals and nomads fear it. The mere mention of its name is bad luck. There are many stories of the worm killing people, but this has yet to be proved.

The worm was popularised by Czech author author Ivan Mackerle, who learned about the creature from a female student from Mongolia. After Communism collapsed in Mongolia in 1990, he mounted an expedition to the country’s desert wastes to hunt for the worm. Except a few testimonies from locals, he did not bring back any evidence. 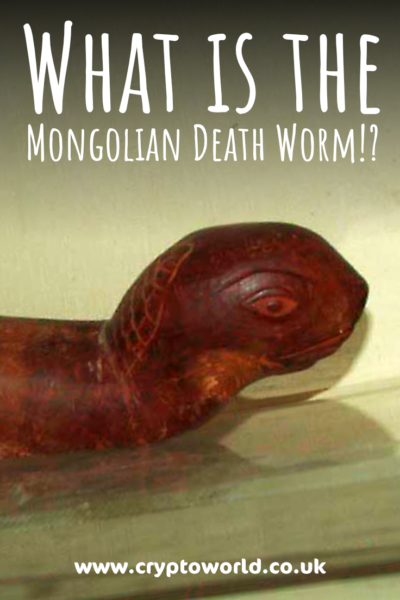