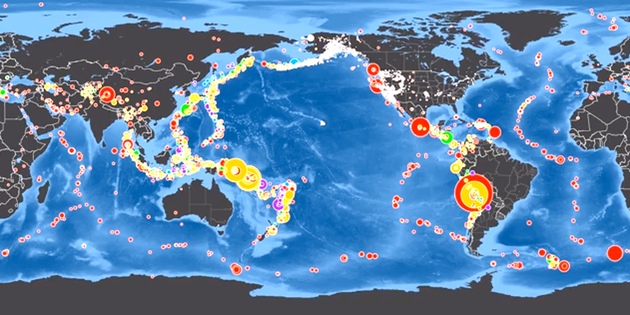 There’s something about time-lapse animations of global events (see Time-Lapse Map of Every Nuclear Explosion Since 1945), this shows all Earthquakes from January to April 2014 and even shows the little quakes that happened here in the UK during April.

Earthquakes happen every day, and as this animation shows, small ones happen more frequently than once per hour. Moderate-to-large earthquakes are less common, however, perhaps 1-2 per month on a long-term average. Therefore April 2014 was unusual not in the total number of earthquakes that occurred but in how many moderate and large ones happened, and PTWC had to issue official message products for 13 different earthquakes in that month for earthquakes with magnitudes of 6.5 or higher, easily a record for this institution. Of those 13, PTWC issued tsunami warnings for 5:

This animation shows all earthquakes on earth so far this year in sequence as recorded in the USGS’s NEIC database (available at earthquake.usgs.gov). Note the typical level of activity through March. But starting with the 8.2 magnitude earthquake in northern Chile on April 1, the rest of the month saw 12 more moderate-to-large earthquakes mostly in Chile and the Solomon Islands but also in Nicaragua, Mexico, Canada, and even the south Atlantic Ocean. The animation concludes with a summary map showing all of the earthquakes in this four-month period.

Robert Anton Wilson – The Map Is Not The Territory: The Future Is Not The Past