Perfectly preserved adult cave bear (even its nose is intact) has been unearthed on the Lyakhovsky Islands in north-eastern Russia. Until now only the bones of cave bears have been discovered.

The new finds are of ‘world importance’, according to one of Russia’s leading experts on extinct Ice Age species.

Scientist Lena Grigorieva said of the island discovery of the adult beast: ‘Today this is the first and only find of its kind – a whole bear carcass with soft tissues.

It is completely preserved, with all internal organs in place including even its nose.

Previously, only skulls and bones were found. This find is of great importance for the whole world.

The bear remains were found by reindeer herders on the island and will be analysed by scientists at the North-Eastern Federal University (NEFU), which are at the forefront of research into extinct woolly mammoths and rhinos.

The cave bear (Ursus spelaeus) is a prehistoric species or subspecies that lived in Eurasia in the Middle and Late Pleistocene period and became extinct about 24,000 years ago during the Last Glacial Maximum.

‘It is necessary to carry out radiocarbon analysis to determine the precise age of the bear’, said senior researcher Maxim Cheprasov from the Mammoth Museum laboratory in Yakutsk.

The cave bear (Ursus spelaeus) was a species of bear that lived in Europe and Asia during the Pleistocene and became extinct about 24,000 years ago during the Last Glacial Maximum.

Both the word “cave” and the scientific name spelaeus are used because fossils of this species were mostly found in caves. This reflects the views of experts that cave bears may have spent more time in caves than the brown bear, which uses caves only for hibernation.

Cave bear skeletons were first described in 1774 by Johann Friederich Esper in his book Newly Discovered Zoolites of Unknown Four Footed Animals. While scientists at the time considered that the skeletons could belong to apes, canids, felids, or even dragons or unicorns, Esper postulated that they actually belonged to polar bears. Twenty years later, Johann Christian Rosenmüller, an anatomist at the Leipzig University, gave the species its binomial name.

The bones were so numerous that most researchers had little regard for them. During World War I, with the scarcity of phosphate dung, earth from the caves where cave bear bones occurred were used as a source of phosphates. When the “dragon caves” in Austria’s Styria region were exploited for this purpose, only the skulls and leg bones were kept.

Many caves in Central Europe have skeletons of cave bears inside, for example the Heinrichshöhle in Hemer, the Dechenhöhle in Iserlohn, Germany. A complete skeleton, five complete skulls, and 18 other bones were found inside Jaskinia Niedźwiedzia (bear cave) in 1966 in Poland. In Romania, in a cave called Bears’ Cave, 140 cave bear skeletons were discovered in 1983.

In August of 2020 a ‘completely preserved’ ice age cave bear carcass was found by reindeer herders in Russia (see story above). The preserved carcass was estimated to be between 22,000 and 39,500 years old with radiocarbon dating proposed to ascertain a more accurate age. It is the only find of its kind with full soft tissue preservation such that even the nose was still intact. The preserved bear was found on Bolshoy Lyakhovsky Island, part of the Lyakhovsky Islands archipelago. In a separate discovery, a well preserved cave bear cub was also found at the same location. 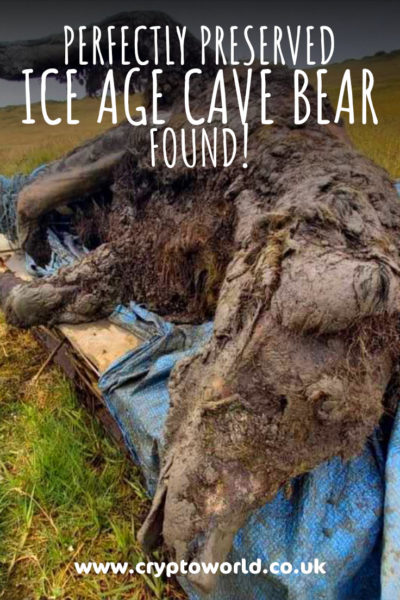