Ninki Nanka — the legendary creature in West African folklore. Descriptions of the creature vary, but most contend that the animal is reptilian and possibly dragon-like.

Most of you by now would have heard about the 2006 CFZ expedition to Gambia, in search of Dragons!

One of the dragon-like beast they are searching for is locally known as Ninki-Nanka, which apparently translates as Dragon-Devil, but there is also some reference to suggest it could just mean Snake, that’s if you search around on the Internet and browse a few dusty cryptozoology books!

River and lake monsters are nothing new in Africa, in the Congo there are stories of a lake monster called Mokèlé-mbèmbé, in Zimbabwe there is the Chipekwe and in northern Angola there is the Isiququmadevu. But apart from a few sketchy descriptions, nobody really seems to know what the Ninki Nanka looks like. So below, we have collected together some info to try and help explain what the Ninki-Nanka really looks like.

As mentioned above, the local name for the Gambian river and swamp monster is Ninki Nanka, which roughly translate as Dragon-Devil. It’s reputed to live along the Gambia River and in the uninhabited mangrove swamps and is usually only seen at night, when it is said to emerge from its lair and eat whatever lies in its path!

The size of Ninki Nanka seems to vary greatly depending of which story you read. It is generally though to be around 30 feet (10 meters) long. But there are stories of it being as big as 50 feet long, that’s a whooping 15 meters!

Possibly the most famous description of the creature suggests it has the body of a Crocodile, the neck of a Giraffe and the head of a Horse – with three horns, one one either side and a larger one on top of its head. Although there have been reports suggesting it is like a large snake or even a large lizard, possibly something similar to Komodo dragon.

A 30 foot komodo would be a scary sight, and you can begin to understand why just mentioning the name Ninki Nanka is enough to insight fear and panic into the locals. Superstition is no joke in Gambia, as it is believed by some that whirlpools are caused by dragons or even the devil and some ponds are sacred because spirits dwell in them. The locals wont go anywhere near the river or swamps where the Ninki Nanka has reportedly been seen or heard. It is said that if you are unfortunate enough to have actually seen the Ninki Nanka and live to tell the tail, then you would be wise not to tell to many people, as they say if you do you will die.

A gruesome creature all round really, assuming it even exists.

The CFZ are due back next week, hopefully they will have some new stories and sightings, perhaps even a better idea of just what it could be. 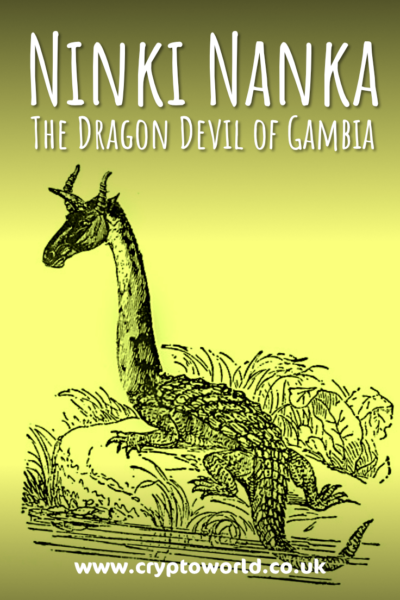