A true monster, closely related to modern day pet guinea pig — imagine keeping one of these in your back garden!

The giant guinea pig, the size of a buffalo and thought to have weighed around 1 metric tonne, roamed the planet around 3 million years ago. Scientists using computer simulated methods believe the monster guinea pig had a bite similar to modern day tigers!

A “guinea pig” the size of a buffalo that lived three million years ago had a bite as strong as a tiger’s, scientists have learned.
Experts believe it may have used its giant rodent teeth in the same way an elephant uses its tusks, to dig for food and defend itself.
Josephoartigasia monesi, which is closely related to modern guinea pigs, is thought to have weighed a metric tonne.
Scientists used computer simulation methods to estimate how powerful a bite it had.
They came up with a force of around 1,400 Newtons – about the same as that of a tiger’s clamping jaws.

Josephoartigasia monesi, an extinct species of South American caviomorph rodent, is the largest rodent known, and lived from about 4 to 2 million years ago during the Pliocene to early Pleistocene. The species is one of two in the genus Josephoartigasia, the other being J. magna.

J. monesi is sometimes called the giant pacarana, after its closest living relative, the pacarana (Dinomys branickii) in the family Dinomyidae. The species may have weighed a ton, orders of magnitude larger than any currently living rodent.

The rodent’s fearsome front teeth and large size may have been used to fight over females for breeding rights and may also have helped defend against predators, including sparassodonts, saber-toothed cats and terror birds.

The rodent may have lived in an estuarine environment or a delta system with forest communities, and may have eaten soft vegetation. It has been stated that J. monesi probably fed on aquatic plants and fruits, because its molars are small and not good for grass or other abrasive vegetation. Larger mammals also have the advantage of access to low-quality food resources, such as wood, that smaller species are unable to digest.

Finite element analysis was used to estimate the maximum bite force of J. monesi. This study concluded that the bite of J. monesi possibly generated up to 4165 N of force, three times as powerful as predicted for modern day tigers. The study also speculated that J. monesi behaved similarly to elephants, utilising its incisors like tusks for digging or defence. 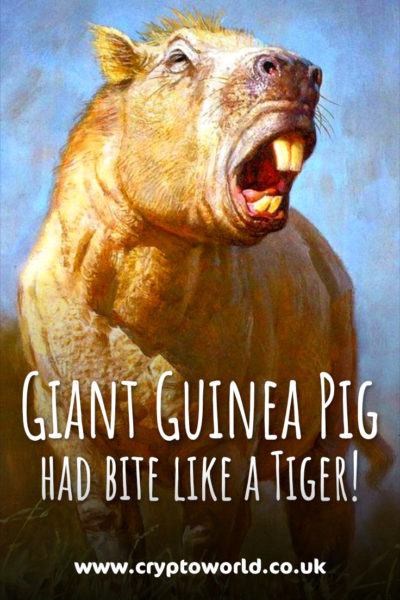