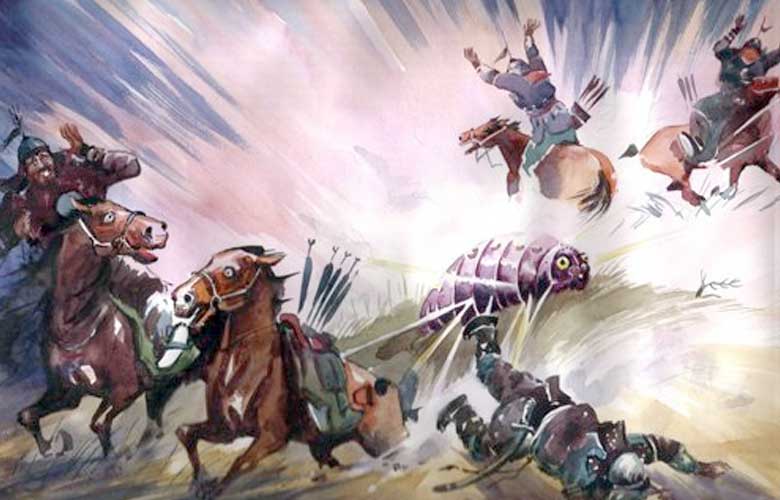 ENGLISH SCIENTISTS GO IN SEARCH OF THE MONGOLIAN DEATH WORM

A group of English scientists are to spend a month in the hostile Gobi desert in search of one of the world’s strangest and most elusive monsters, the Mongolian Death Worm. Known to the locals as Allghoi khorkhoi (Mongolian for intestine worm due to its resemblance to a length of cow’s stomach), the blood red creature is much feared.

Three to five feet long, the Death Worm is said to lurk beneath the sands, emerging only at certain times of the year to spread fear among the desert dwellers. The nomads insist that the beast can spit a corrosive yellow saliva that acts like acid and that they can generate blasts of electricity powerful enough to kill a full grown camel. It is a monster worthy of Dr Who but how true are the stories?

Expedition leader, cryptozologist Richard Freeman thinks it’s death dealing powers are apocryphal. “It’s like the salamander in medieval Europe, it was thought to be deadly poisonous. Alexander the Great was supposed to have lost hundreds of men after they drank from a stream that had a salamander living in it. But now we know itâ’s harmless. Even today in the Sudan, people think that the harmless sand boa is so venomous that you only have to touch it and you will die.”

What kind of animal is the Death Worm? Freeman has a theory. “I don’t think that it’s a worm at all. True worms need moisture. I think it is a limbless, burrowing reptile, probably a giant member of a group of reptiles known as amphisbaenas or worm lizards. These are a primitive group of poorly studied animals. They are not snakes or lizards but are related to both .I think the Death Worm is a giant member of this group.”

The team plans not only to catch the creatures but bring them back to England alive! They intend to force the Death Worms up from their burrows by damming local streams and flooding small areas of the desert.

The group are from the Exeter based Centre for Fortean Zoology, the world’s only full time, scientific organization, dedicated to the study of mystery animals. Past expeditions have included hunts for the Chupacabra, a blood drinking, nocturnal beast from Puerto Rico, the Naga, a 60 foot crested serpent in the jungles and caves of Thailand, and Orang-pendek, an ape man in the unexplored valleys of Sumatra.

NOTES TO EDITORS:
1. The CFZ is a non profit making organisation registered with the British Government
2. The US Office is run by best selling author Nick Redfern
3. Nick Redfern’s new US Bestseller Three Men Seeking Monsters is on sale now through Paraview Pocket Books, and tells the story of one of the CFZ’s more exciting adventures
4. In recent years the CFZ have mounted expeditions to Indonesia, Thailand, Mexico, Puerto Rico,and several parts of the United States, Britain and Europe.
5. Details of the Mongolia expedition can be found at www.deathworm.co.uk

In the late 80s I started investigating UFOs and crop circles and joined the CCCS (Centre for Crop Circle Studies) and a local group researching strange sightings and reports along the south coast of Dorset (UK). In the early ’90s I started my own research group called SPS (Strange Phenomena Studies), this was renamed in 2004 to Cryptoworld.
advertisements